Sweet Home Costa Rica: A Story of War… And Peace 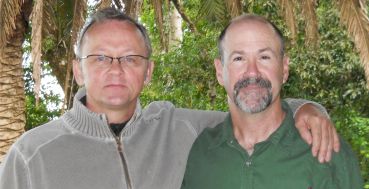 During the military and political buildup to the Korean War, five members of the Fairhope, Ala. Monthly Meeting of Friends went to prison for refusing to register for the draft. Had they registered, they believed, they would have been “sanctioning war,” a step that neither their faith nor their consciences permitted. “I felt that it was my duty,” one war-resister, Marvin Rockwell, told us recently, “to try to show as many people as possible how wrong war is.”

Shortly after Rockwell was released from federal prison in late 1950, he and some 40 other Quakers from Fairhope – nine families in all – took a resounding stand: they left the US, a country that had denied them the right to religious freedom, and immigrated to Costa Rica. “We really didn’t want to raise our kids in the States, where the atmosphere was so militaristic,” Mary Rockwell (a relative of Marvin’s by marriage) told us. “We settled on Costa Rica because it was a peace-loving country and they had just gotten rid of their army.”

After a six-month search for suitable land on which to settle, the Quakers moved to a remote and isolated cloud forest they named Monteverde, or Green Mountain. There they set about building a life of pacifism and community. A Meeting House, a cooperative cheese factory (many had been dairy farmers in Alabama) and a Friends School were the first institutions they established, all of which are flourishing today.

Through interviews with the handful of surviving pioneers and their children, as well as with Costa Rican and American historians and political scientists, and through extensive use of archival photos, newsreels, letters, diaries, home movies, news clippings and court records, the film will chronicle the Alabama Quakers’ decision to emigrate – to uproot themselves and their families from everyone and everything they knew — and their efforts to build a pacifist community anew in Costa Rica.

We’re interested in how our subjects fit into their time and place. The film will frame their story in both the American postwar peace movement as well as that of post-Civil War Costa Rica. (The brief but bloody Costa Rican war lasted for three months during 1948.)

Regarding the former, we’ll briefly examine the wartime and post-war pressures and influences at work in the US: the ways in which words such as “patriotism” and “freedom” were used to intimidate and persecute pacifists.

As to Costa Rica, we’ll explore how the country came to embrace the Quaker testimony of peace, what that decision says about Costa Rica’s identity, culture, politics and the economy, and how and whether its decision to abolish the army might be replicated elsewhere.

Objective(s) of project to be supported by requested grant:  The film’s objective is to document how ordinary Americans of the mid-20th century struck an extraordinary blow for peace. We hope that the film will serve as an instructive and entertaining piece of recovered history and that it will provoke contemporary audiences to contemplate their own place in the war economy of the early 21st century. And we hope, as Marvin Rockwell put it, “to try to show as many people as possible how wrong war is.”

This is primarily a work of documentary journalism and history. It requires a good deal of legwork to track down primary-source materials that will buffet our interviews with the principals, and with those who can help frame our subjects in the context of their times. In the narrative above we have cited our principal primary sources (not specific citations, of course, but the types of materials we’re relying on).

The most critical secondary text is a volume self-published by the Monteverde Friends Meeting on the occasion of its fiftieth anniversary. The book is titled Monteverde Jubilee Family Album and was published in 2001. Its editors solicited contributions from many local families, who responded with first-person essays, photographs, drawings and other ephemera dating to the group’s founding.

We have also relied on various Quaker readers for the history, principles and interpretations of the Quaker peace testimony. One particularly useful midcentury volume, and the best single guide we found to the essentials of Quakerism, is Friends for 300 Years, by Howard Brinton (Pendle Hill, 1952).

Additionally, we have read books by and about Henry George (Progress and Poverty). George provided the intellectual framework for the founding of Fairhope, Alabama. The town was founded by former Iowa Populists in 1894 as a utopian single tax colony, and it is both necessary and instructive to view the Quakers’ exodus through the prism of Fairhope’s radical history.

Finally, we have read a good bit about Costa Rica’s remarkable 20th century history, and particularly about its civil war and aftermath. Its history in many ways is hopeful, for Costa Rica challenges the widespread belief that Latin American wars and violence are both inevitable and insoluble.

The Foundation acknowledges that William Adler and Jody Jenkins have successfully completed their project.

Sweet Home Monteverde is now available for free streaming!  You can watch it through Rocky Mountain PBS here.