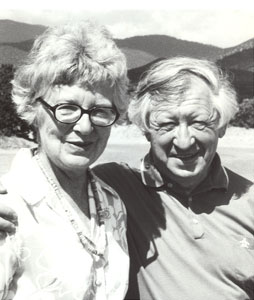 Larry Senesh was born in Hungary and fled to the United States in 1940. He had an economics degree from the University of Berlin. He married Dorothy Marchus in 1943. He received a Commendation for Outstanding Service and a Bronze Star for his service in the Army during World War II. After the war he joined the faculty of the University of Denver. In 1952 he became the first staff economist with the Joint Council on Economic Education in New York City. In 1957 he joined the economics department at Purdue and in 1969 became a faculty member at the University of Colorado.

In the 1950s Dr. Senesh received major grants from the Carnegie Foundation for research in economic education and conceived and developed the idea of the “organic curriculum.” From 1964 to 1973 he developed a social science curriculum for grades one through six, titled “Our Working World.” He was a founding member of the Social Science Education Consortium and co-founder of the Academy of Independent Scholars. He received an honorary doctorate from Purdue University, the Marvin Bower Medal Award from the Joint Council on Economic Education, and a Fulbright Award for his life’s work.

Dorothy Marchus was a life long peace activist. Partly from her interests, Dr. Senesh was deeply concerned about issues of underdevelopment in countries of the South. Upon his wife’s death in 1989 he established the Dorothy Marchus Senesh International Fellowship for graduate study in peace and security studies for women from the Global South.