MEMBER OF THE BOARD OF DIRECTORS 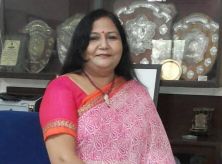 Vidya Jain (born July 15, 1956) is a professor of Political Science in the University of Rajasthan Jaipur, Rajasthan (India) since 2002. She is also Director, Centre for Gandhian Studies, University of Rajasthan, since 2009. She is Asia Pacific Peace Research Association (APPRA) Secretary General. She was also Deputy Secretary General of APPRA (2010-12). Her Ph.D work is on Gandhi’s Political Leadership, which was later published. Vidya Jain is a well known scholar of Gandhian and Peace Studies. She has anthored 4 books and innumerable articles in journals of national and international repute. She has been principal of Maharani College, Jaipur which is Asia’s biggest Girls College. She is at the editorial board of several journals and member of Global Political Economic and Non Violence commission of International Peace Research Association (IPRA) and member of Nonkilling political Science committee of the Centre for Nonkilling, Hawaii (USA). She is member of research committee of IPRA. Her books “Peace, Non Violence and Gandhian Concerns” was released in APPRA conference in Kyoto, 2011 & ‘New Paradigms of Peace Research: Asia Pacific Context’ in IPRA Conference, Tsu-City 2012. Prof. Jain has organized several conferences, workshops, seminars and refresher courses on different themes of Peace, Gender & Gandhian Studies. She is widely travelled to almost all the continents of the world and different parts of India. She is a popular speaker and made presentation in different national and international seminar in different capacities like Chair, Key note speaker, Resource Person, initiator and Panelist. She is actively involved in spreading Gandhian ideas and practices throughout the globe. She is first woman professor in Asia, who is elected as APPRA Secretary General.