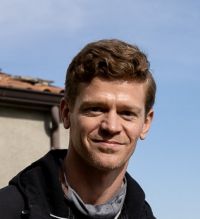 Public memory of the Anglo-American invasion and occupation of Iraq is fading, and what little memory persists is fragmented, limited to a narrow range of perspectives, and heavily influenced by propaganda and partisan news media coverage. The sieges of Fallujah—the first took place in May of 2004 and the second in November of the same year—are a paradigm example. While the conflict as a whole has been recast as a “mistake,” a foreign policy blunder shorn of any sense of responsibility or wrongdoing; the operations in Fallujah are one of the few shiny moments the American public looks back on proudly. Fallujah stands out as a series of pitched battles (in contrast to the less spectacular counterinsurgency campaigns) that “liberated” the city from the grips of al-Qaeda. However, these perceptions were constructed through violent forms of storytelling, driven by US information operations—militarized propaganda. This project conducts filmed oral history interviews with veterans—both Iraqi insurgents and American Marines—of the Sieges of Fallujah in 2004 to document their memories of armed combat, the incongruences between their personal memories and the public’s memory of these events, and their struggles with trauma and postwar readjustment. The goals of this project are to, first, bring the incongruent experiences and perspectives of Iraqi insurgents and American veterans into a synthesizing, reparative framework, as the first step towards a greater sense of solidarity and a commitment to a collaborative project of truth-telling. Second, by crafting a polyvocal narrative history of the sieges of Fallujah, this project aims to leverage people’s history as a counterweight against the violence and power of the official US military narrative, constructed through their information operations.

Ross Caputi is a PhD student in Modern U.S. and Italian history, with special interests in the U.S. wars in Iraq and the social and cultural history of southern Italy. He is pursing a public history certificate with a concentration in oral history and digital history. In the Italian village of Grumento Nova, Ross is combining historical linguistics with oral history methods to document this town’s endangered language and link their history of language change to their experience of modernization. This project, Memoria e Lingua Grumentina, uses digital media to help preserve Grumento Nova’s linguistic and cultural heritage and make these resources available to the community. This work is supported by the Fulbright “Con il sud” award. Ross’s research on U.S. military operations in Iraq brings together elements of new military history, propaganda studies, and people’s history. He is the main author of The Sacking of Fallujah: A People’s History (UMass Press 2019) and the Head Archivist of Archive Iraq.