Dr. Matthew Eddy is the writer, director and lead producer of a documentary film titled “A Bold Peace: Costa Rica’s Path of Demilitarization.” This film explores the conditions of peace in Costa Rica and the peace strategies Costa Rica has pursued while living without a military for over 65 years, all while living in one of the most violent regions of the world. It is an experiment in peace and nonviolence that the world has neglected for too long. Few U.S. citizens know about Costa Rica’s demilitarization. Even fewer know that Costa Rican leaders helped to convince Panama and Haiti to also disband their militaries.

“A Bold Peace” engages a U.S. audience in an inspiring narrative about Costa Rica’s unique history of peace and social solidarity. Given our high-quality production values, the interviews with famous figures and the narrative pieces we have assembled, this film can be one of the most powerful peace films of recent years. Unlike other films on U.S. militarism, this film appeals to the hopeful impulses of humanity as it inspires by showcasing the little known example of Costa Rican demilitarization.

The abolition of the military has had very positive social consequences in Costa Rica. For those who would critique militarism and the permanent war economy of the U.S., there is no substitute for the power of an alternative example, especially one with a 65-year long track record of success. Costa Ricans enjoy universal health care and they now live longer than the people of the United States. In recent years, Costa Rica has twice earned the number one spot in the Happy Planet Index, a ranking of nations based on measures of environmental sustainability and the health of its citizens. The World Database of Happiness, with data on 149 nations compiled by a Dutch sociologist, lists Costa Rica as number one in self-reported happiness and number one in happy life years. In 2014, Costa Rica ranked as the safest nation in Latin America. Costa Rica is also a leader in environmental policies, with almost one-third of the country protected in national parks. And, the Costa Rican government has committed to becoming carbon neutral by the year 2021.

This film brings attention to Costa Rica’s inspirational national project, answering why happiness, health, and human rights occupy a relatively prominent place in this Central American country. In 1948, Costa Rica became the largest nation in the world to disband their military and to redirect national resources towards public education, public health, and the environment. It remains the largest nation in the world without a military or a military base on its soil. Contrary to the uninformed assumptions of many U.S. citizens, it is not the U.S. military which has made demilitarization possible in Costa Rica. Rather, U.S. foreign policies including U.S. efforts in militarizing the region have often destabilized Costa Rica. The historical record shows that Costa Rica has cultivated diverse networks of support through international treaties and organizations (e.g., the Organization of American States, the United Nations, etc.). Over the years, these networks proved vital as Costa Rica pioneered a national security model which relies on an emerging global peace system grounded in international laws, treaties, organizations, and courts.

Hence, Costa Rica exemplifies real historical choices that can lead to a more peaceful world. Moreover, the significance of the Costa Rican case is not easily dismissed by its small size. Rather, if a small nation like Costa Rica can so effectively use diplomacy and international law, how much more could large nations further peace by taking cues from the Costa Rican model.

The disbanding of the military in 1948 is still widely celebrated in Costa Rican culture, among political elites and average citizens alike. In a survey of over 300 Costa Rican university students, 91% opposed the return of a national military (Eddy 2013). Costa Rica’s diplomatic track record is also impressive. In an extensive review of Costa Rica’s foreign policy, the political scientist Alison Brysk (UC Santa Barbara) has written, “Costa Rica qualifies as a ‘global good Samaritan’ because its record of human rights promotion is enduring and multifaceted, and it makes a meaningful contribution to globally significant initiatives” (Brysk 2005, p.447).

Goals and Mission of the Film

If we can obtain additional funding, we expect that the film will receive a wide viewing in film festivals during late-2015 and generate conversations about military spending, peace policies, and national priorities in communities and university and high school classrooms across the United States for years to come. Inspiring and informing the next generation of peace and justice activists about alternative national security models is one of the primary goals of the film.

This film is timely – it contrasts U.S. militarism with Costa Rica’s alternative experiment in peace and their investments in public education and universal health care. The film promises to help jump start national conversations about the opportunity costs associated with the U.S. military budget by holding up a different way – Costa Rica’s path of demilitarization. Pointed parallels and contrasts are made with recent U.S. debates over austerity, cuts in social spending, education, and healthcare, and the escalating costs of U.S. militarism.

Our goal is to provide concerned citizens everywhere with historical knowledge and a vision of a different way –a nation living in one of the most violent regions of the world, that has chosen to prioritize human well-being in their federal budget, and nonviolence in their international relations. The film shows how Costa Rica exemplifies this different way – the way of demilitarization, solidarity, international law, and diplomacy. A 3-minute film trailer is viewable online at our website: http://aboldpeace.com.

History of the Film Project

My doctoral dissertation on “cultures of peace” included several chapters on the peace culture and history of Costa Rica. In 2012, I received a grant with Dr. Michael Dreiling (my advisor) from the Jubitz Family Foundation, as seed money to begin making a documentary film about Costa Rica’s bold experiments in peace. At this time, Dr. Dreiling (Co-Director and Co-Producer of the film) and I began a collaboration with an award-winning, young professional filmmaker, Teal Greyhavens. We completed a summer of shooting interviews and footage in 2012, and again in 2014. 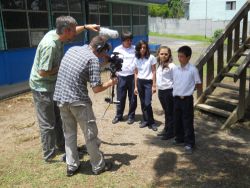 This film was made in close cooperation with Costa Ricans, especially Amigos Para La Paz, a Quaker peace organization in the capital city of San Jose, Costa Rica. Our film includes original interviews with the following individuals: Arun Gandhi (Gandhi’s grandson who lived with Gandhi as a teenager, and who speaks in our film about “soul force” and Costa Rica’s example of peace), Oscar Arias (the Nobel Peace prize winner and former two-time President of Costa Rica), Mariano Figueres (the son of the man who abolished Costa Rica’s army, Jose Figueres, who is known as the Abraham Lincoln and George Washington of Costa Rican history), Norman Solomon (a nationally known journalist with the Institute for Public Accuracy, and an important anti-war activist), and David Barsamian (the founder and host of Alternative Radio which airs weekly on some National Public Radio stations).

In its current state, the film is 99 minutes long. It is filmed in HD (High-Definition, broadcast quality). It is built of 6 layered video tracks and 10 layered stereo audio tracks, and includes elements culled from 15 separate documentary films, 320 archival clips, 318 still images (including several from the National Archives of Costa Rica), 146 musical tracks, 620 different sound effects, and 22 hours of our own original footage. A professional artist, Micah Bloom, recently completed three beautiful animation segments for the film. These segments bring to life the events surrounding the abolition of the military in 1948 – events for which no historical film clips exist. No film to date has recreated these events.

Synopsis of Film: A Bold Peace

In his famous “Cross of Iron”/ “Chance for Peace” speech in 1953, President Eisenhower critiqued the military-industrial complex while asking, “Is there no other way the world may live?” In Costa Rica today, we see another way to live – it beckons to the world, and struggles to endure. Costa Ricans created a society committed to peace, solidarity, and international law. They have survived with safety and relative prosperity for 65 years without a standing army. How did this happen?

Chapter 1: Another Way
The film details Costa Rica’s relative success as indicated by its #1 ranking in several global surveys of happiness and its #1 ranking in the Happy Planet Index. Costa Rica’s “culture of peace” is explored as Costa Ricans explain their views on demilitarization, the value of social solidarity, an innovative nonviolent communication/ peace education program in the schools, and their perceptions of the cultural ethos of “Pura Vida.”

Chapter 2: The Abolition of the Military
In the early 1940s, an unusual coalition of the Catholic Church, Labor leaders, and the Calderon administration pushed through progressive reforms which laid the foundation for a strong welfare state. Political corruption and electoral fraud led to the Civil War of 1948. The film briefly explores the formation of Jose Figueres as a uniquely visionary leader and his rise to the national stage. Figueres may well be the most interesting Latin American leader that U.S. citizens have never heard of. Figueres’s decision to abolish the army is described as both pragmatic and idealistic. He was a self-taught man and a voracious reader of political thinkers including the leading pacifists Tolstoy and Emerson. As leader of the revolutionary Junta, he re-solidified Costa Rica’s social democracy and walked away from power in order to honor that democracy.

Chapter 3: New Challenges
Costa Rica’s peace model has been put to the test several times. In the 1980s, in the face of raging Civil Wars across Central America and intense pressure from the Reagan Administration, President Monge’s Neutrality Declaration and President Oscar Arias’s Peace Plan negotiations are highlighted as bold attempts to stand for peace in one of the most violent regions of the world. A fascinating grassroots effort to remove Costa Rica from the list of the “Coalition of the Willing” at the outset of the U.S.-led Iraq War is detailed. In 2010, in a shocking provocation, the Nicaraguan Army occupied part of Costa Rica’s territory. Rather than retreat, Nicaragua doubled their forces on the border. Costa Rica diffused the crisis by appealing to the Organization of American States and the International Court of Justice. Costa Rica’s response offers a crucial case study in international law and diplomacy.

Chapter 5: Threats to Peace
Costa Rica is no utopia. Rising inequality in the wake of economic globalization/ neoliberal “free trade” threatens to destabilize Costa Rica’s traditions of solidarity and social democracy. And, much as in the 1980s, U.S. foreign policy – this time in the form of the Drug War – also threatens Costa Rica’s tradition of demilitarization.

Chapter 6: The Permanent Warfare State
The Costa Rican model illuminates the heavy opportunity costs and ongoing human tragedy of the U.S. military-industrial complex/ permanent war economy. The U.S. defense industry, U.S. spending priorities, and U.S. diplomatic failures to support international law and UN treaties including the Arms Trade Treaty (led by the Costa Rican leader Oscar Arias) are critiqued. In the film’s conclusion, ordinary Costa Ricans read the names of 9 significant international peace and human rights treaties that Costa Rica has signed, but which the U.S. government has so far refused to sign.

Longley, Kyle. 1997. The Sparrow and the Hawk: Costa Rica and the United States During the Rise of José Figueres. Tuscaloosa, Alabama: University of Alabama Press.