“Project for Peace Building and Research in Crimea” 2003 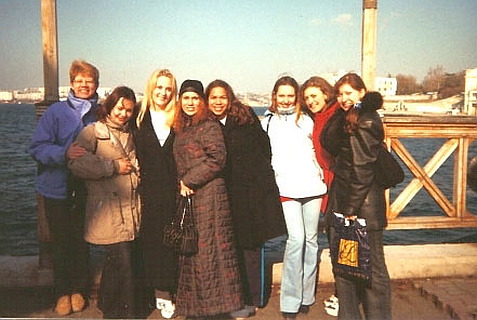 After the Fall: Understanding Peace in the Crimea

The Crimean peninsula is a unique area of Ukraine. Once the playground of the Russian elite during the Soviet rule, it maintains a strong Russian cultural identity today. Before the Russian empire conquered the peninsula in the eighteenth century, it was primarily inhabited by an ethnically Turkic, Muslim people called Tatars. The Tatars consider the Crimea their homeland, and were forcibly removed in 1944 by Joseph Stalin who believed they were Nazi sympathizers against Russia during World War II. They were deported to work camps in Central Asia, and not released until 1956. The Soviet government officially exonerated the Tatars from any wrongdoing in 1967, but did not facilitate their return to the Crimea. It was not until the late 1980s that the Tatars were allowed to repatriate to the Crimea. Today Tatars face many difficulties including gaining citizenship, lack of access to social services, lack of representation in government, racial discrimination and repossessing the homes from which they were forcibly removed. Yet, with all of these complications, there is no collective physical violence in the Crimea.

After the Fall: Understanding Peace in the Crimea is the comprehensive report of a yearlong research project developed and administered by the International Applied Practice and Theory Team (IAPT) from the Institute for Conflict Analysis and Resolution (ICAR) at George Mason University. This case study analyzes five variables that we believe maintain peace in the Crimea. Research was conducted primarily in Simferopol, Crimea’s capital, in March 2003 through surveys, interviews, workshops and personal observations. Our research participants include students from National Tavrida Vernadsky University and Crimean State Industrial Pedagogical Institute, business leaders, NGO representatives, International Organization representatives and Conflict Resolution practitioners. The project was funded by the International Peace Research Association (IPRA) and ICAR funds.

The upcoming 2004 presidential elections will most likely have no impact on the peace in the Crimea. The thirteen-year electoral history of Ukraine has been tumultuous due to the heavy impact of corruption, internal regional power plays, external influences, and a growing belief by Ukrainian voters in democratic processes. This tumultuousness has lowered the voters’ expectations so much that the state will not have a hard time fulfilling those expectations, thereby ensuring a state of peace. Should the results of the elections bring some kind of negative influence on the state, it is unlikely mass violence will ensue because the people’s expectations are so low. A streak of optimism does however exist because a quarter of those surveyed feel that the elections will improve the situation.

The glimmer of hope demonstrated by those who believe the elections may improve the situation is too small to create severe relative deprivation in the event of a negative repercussion. If the elections do bring about positive change, it will future strengthen the existing peace and could provide greater hope going into the next parliamentary elections in 2006. Unlike elections, the other variables demonstrate greater impact on the state of peace in the Crimea.

The region’s economy has suffered tremendously since the Crimea obtained independence, and is now showing signs of a slow recovery. The repatriated populations in the Crimea have been particularly hard hit by the economy, with nearly one third of the population living in poverty. The rate of economic growth, despite slow improvement, remains hampered by excessive government regulation, corruption, and the lack of law enforcement.

Considering other factors such as high unemployment rates and unequal access to employment opportunities, delays in the payment of wages, and economic inequality, more than half of the people surveyed felt that the state of the economy has had a negative impact on peace in the Crimea. However, the current economic growth in the whole Ukraine, as small as it may be, is helping maintain peace in the Crimea. This is due in large part because the slow growth is following a long period of sharp economic decline, which effectively reduced individuals’ expectations for the economy. Should the economy take a turn for the worse, people’s expectations may begin to exceed economic capabilities of the state resulting thus in frustration which could lead to mass violence.

Culture is frequently the accused culprit of conflict. Cultural differences remain pronounced between the Russians, ethnic Tatars and Ukrainians in the Crimea. The cultural tensions between the Russians and ethnic Tatars are often seen as the consequence of continued perceptions of the past relationship between the two groups. As religion mirrors ethnic identification in the Crimea, incidences of religious violence though few, appear symptomatic of the perceived threat to each group’s identity. These differences are an additional stress to the tension resulting from the struggle for a post-soviet, neo-Ukrainian identity. Language had become the most contested issue in inter-ethnic relations. The primary use of Russian in the Crimea is contradictory to the degree that Ukrainian is the official language of Ukraine. Meanwhile, Tatar, though a recognized minority language, does not enjoy usage in official settings.

Despite differences among varying ethnic and national groups in the Crimea, ample opportunities exist for cultural development. More than 90% of respondents said they had an equal opportunity to practice religion, which positively affects peace in the Crimea. In terms of education, more than 70% of the surveyed felt that they do not have equal access to educational opportunities, and this is due in large part to the reintegration of the Crimeans, specifically the Tatars, after their return from exile. Ultimately, more than half of the people who responded to the survey agreed that equal educational opportunities affect peace in the Crimea. Although significant cultural differences exist in the Crimea, the freedom to practice and develop one’s own traditions helps maintain the peace.

The presence of international organizations and local NGOs is one of the most positive contributions to stability in the region. With the repatriation of the Crimean Tatars, and the re-positioning of Ukraine within the new World Order, the Crimea faced a magnitude of political, economic, and social problems that needed to be immediately addressed by both the local and international communities. The international organizations and NGOs serve that purpose through building community cohesiveness, providing cultural understanding, and engaging in activities that support the disenfranchised groups in the Crimea.

The variables above are interlocking and overlapping; therefore one variable alone will not produce violent conflict in the Crimea. The variables interact and feed off one another to maintain peace. The elections maintain peace by simply maintaining the status quo of low expectations for government action in the Crimea. Access to education, religion, and cultural development has helped offset the impact of the sluggish economy by providing outlets for personal development, and by fulfilling the need for identity, which may otherwise be threatened by economic stressors. However, these positive conditions may not be sufficient to maintain peace, should the economy take a turn for the worse. Positive influences such as the numerous international organizations and NGOs working in the Crimea serve to strengthen opportunities for peace and help outweigh violence producing incidences.

1. Development of work strategies to bring more skilled jobs to the region and address the problems of underemployment.
2. Development of a method through which economies based heavily on “shadow” economies can transition to be open and transparent.
3. Strong efforts to resolve land rights disputes and continuing issues over language.
4. International community should continue funding peacebuilding programs in the Crimea focusing on improving the collaboration among NGOs.