Founding Member of the IPRA Foundation Board of Directors 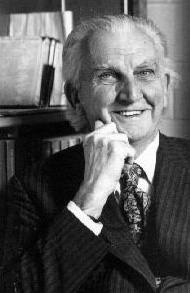 Kenneth Boulding, a much-honored but unorthodox economist, philosopher and poet, died yesterday. He was 83.

His assistant, Vivian Wilson, said Professor Boulding, who had taught at the University of Colorado in Boulder since 1977, died at his home after a long bout with cancer.

Nominated at different times for Nobel Prizes in both peace and economics, Professor Boulding was renowned less for a single contribution to economics than for a large number of interesting intellectual and moral insights that both charmed and challenged his fellow social scientists.

In addition to writing three dozen books, three volumes of poetry and 800 articles, Professor Boulding — whose white mane, stammer and pointed wit made him distinctive — lectured frequently and entertainingly.

“Ken Boulding is like wine that can’t be shipped very far,” said Mancur Olson, a professor of economics at the University of Maryland. “His talks, his writing were so full of brilliant asides that no summary does them justice.” Early Successes

The son of a plumber, Kenneth Ewart Boulding was born in grimy Liverpool, England, in 1910. He won a chemistry scholarship to Oxford, said Mark Blaug, professor emeritus at the University of London, but soon switched to economics. In 1931, at age 22, he had his first paper — a short but brilliant work on economics — accepted by the Economic Journal, edited by John Maynard Keynes, the British economist.

Like the American economist Paul Samuelson and the British economist Nicholas Caldor, Professor Boulding initially concentrated on adding his own insights to Keynes’s theory that depressions are due to too little private spending and that governments should run deficits to end them.

His first book, “Economic Analysis,” was an introductory textbook that over four editions between 1941 and 1966 blended Keynesian and neoclassical economic theory into a coherent synthesis. Professor Blaug said the book was “remarkable in showing how far one can go in economics by using no tool more complicated than that of demand and supply.”

Professor Boulding, from a family of deeply religious Methodists, became a Quaker as a young man and remained a passionate if unconventional Christian throughout his life. An ardent pacifist, he opposed Word War II and lost his wartime post as an economist at the League of Nations. Concerns Beyond Economics

His spiritual and philosophical concerns ultimately led him to look far beyond economics. “Imagine someone who was half Milton Friedman, half Mahatma Ghandi,” said Professor Olson, who knew Professor Boulding well and credits him for influencing his own work.

Professor Boulding invented new areas of economics, including the economics of peace, and published a book of that title in 1945. (An Ayer edition is still in print.)

Professor Boulding won the John Bates Clark Medal of the American Economic Association in 1949, a prize given every two years to the economist under age 40 judged to have made a significant contribution to economic thought. The award was recognition that Professor Boulding was one of the best and brightest of his generation of economists. After that, he increasingly wandered from the traditional concerns of economics.

“He left economics,” said Wassily Leontief, himself a Nobel Prize winner in economics. “He became a universal philosopher.”

Though an outsider among modern economists, Professor Boulding was heaped with many honors. He became president of the American Economic Association in 1968 and was awarded dozens of honorary degrees.

Part of his charm was his rare diversity. He wrote rhymed poetry (one of his books was entitled “Beasts, Ballads and Bouldingisms”), sculptured, painted water colors and, friends said, used to sing entire Gilbert and Sullivan musicals from memory and could recite nearly all of Wordsworth.