Past Member of the Board of Directors 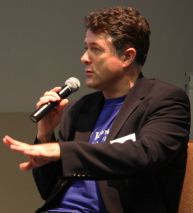 Associate Professor Jake Lynch, PhD (City University, London) is Director of the Centre for Peace and Conflict Studies (CPACS) at the University of Sydney; an Executive Member of the Sydney Peace Foundation and Secretary General of the International Peace Research Association, having organized and hosted its Sydney conference in July 2010.

Jake has spent the past 14 years researching, developing, teaching and training in peace journalism – and practising it, as an experienced international reporter in television and newspapers. He was an on-air presenter, anchoring over a thousand half-hour news bulletins for BBC World TV. Before that, he was the Sydney Correspondent for the London Independent newspaper, and a Political Correspondent for Sky News.

Since 1999 up to the present day, Jake has led training workshops in peace journalism for professional editors and reporters, and in media skills for peace workers, in many countries including Fiji, Indonesia, the Philippines, Nepal, Lebanon, Jordan, Palestine, Cyprus, Armenia, Georgia, Norway and the UK. Clients have included the British Council, Council of Europe, DANIDA, GTZ, SIDA, NORAD, the Olof Palme Memorial Fund and the Australian Commonwealth government.

Publications include several books and many book chapters and refereed articles on peace and peace journalism. In 2008, Jake was guest editor of a special edition of the Routledge scholarly journal, Global Change, Peace and Security, with contributions based on presentations to a major conference he organized at the University of Sydney.

He is also the author of several think-tank reports and innumerable articles in public media including the Sydney Morning Herald, the Australian and the Canberra Times. He is the on-screen host of The Peace Report, a streamed television program produced by the New Matilda current affairs website. In 2009-2010 he wrote a weekly column, combining commentary on world affairs with media analysis and literacy issues, for the TRANSCEND Media Service website. He is a regular contributor to radio and television. Jake has senior production credits on three documentary films, including the multi-award winning Soldiers of Peace, narrated by the Hollywood actor, Michael Douglas.

In 2009, he won a prestigious competitive grant, worth half a million dollars, from the Australian Research Council, to investigate prospects for devising a Global Standard for reporting conflict, in partnership with the International Federation of Journalists and the aid agency, Act for Peace.

Jake contributes teaching to a broad cross-section of study modules, at both Undergraduate and Postgraduate level, in the Centre for Peace and Conflict Studies at the University of Sydney. Among the units Jake coordinates:

The last of these is now being split into two, with a second unit, Information Interventions in Conflict, now due to be offered in 2011, coordinated by Jake with colleagues from the Department of Media and Communications and contributions from practitioners in related fields.

Among the units to which Jake has contributed teaching:

• Nonviolence and social change;
• The UN and International Conflict Resolution;
• Peace and the Environment;
• Religion, War and Peace;
• Dissertation Part 1;
• History and Politics of War and Peace (Undergraduate).

2011: ‘Review essay: Understanding Peacekeeping by Alex J Bellamy and Paul D Williams with Stuart Griffin; Under Attack: Challenges to the Rules Governing the International Use of Force by Belinda Helmke; and Preventing Genocide: Practical Steps toward Early Detection and Effective Action by David A Hamburg’, Australian Journal of International Affairs (ERA rating = A), in press.
2010: ‘Defending John Pilger’s journalism on Israel and Palestine’, Ethical Space: The International Journal of Communication Ethics (ERA rating = A) vol 7, no 4.
2008: ‘Active and passive peace journalism in reporting of the ‘War on Terrorism’ in The Philippines’, Peace and Policy, vol 13.
2008: ‘Modernisation or participatory development: the emerging divide in journalist training for conflict-affected societies’, Global Change, Peace and Security, vol 20 no 3.
2008: ‘What works – and what doesn’t. New directions in conflict intervention’, Global Change, Peace and Security, vol 20 no 3.
2007: ‘Peace Journalism and its discontents’, Conflict and Communication Online, vol 6 no 2.
2007: ‘A reply to the replies’, Conflict and Communication Online, vol 6 no 2.
2006: ‘What’s so great about Peace Journalism?’, Global Media Journal, Spring edition.
2005: ‘War and Peace Journalism in the Holy Land’ Social Alternatives, vol 24 no 1.
2004: ‘Reporting Iraq – what went right? What went wrong’ in Mediactive Issue 3, Mediawar editor Anita Biressi, Barefoot Publications, London.
2002: Conflict, Security & Development Group Bulletin, King’s College, London, Issue Number 14: ‘Journalist Ethics and Reporting Terrorism’.

2009: Virtuous War by James Der Derian (for War and the Media Network).
2009: The Responsibility to Protect by Alex Bellamy (for the Australian Journal of International Affairs).
2009: The Responsibility to Protect by Gareth Evans (for the Australian Journal of Political Science).
2009: Stealth Conflicts by Virgil Hawkins (for the Journal of Peace Education)
2007: Language Wars by Jeff Lewis (for Social Semiotics).

Other papers and reports