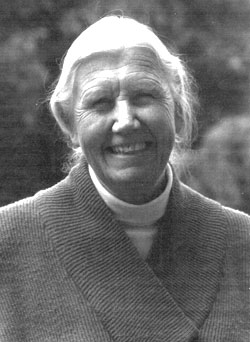 Elise Boulding died at 4:40 pm, June 24, 2010 in Needham, MA. Hailed as a “matriarch” of the twentieth century peace research movement, she was sociologist emeritus from Dartmouth College and from the University of Colorado and in on the ground floor in the movements of peace, women’s studies and futures and played pivotal roles in each. Her writings on the role of the family, women, spirituality and international non-governmental organizations have offered activists and educators new ways of conceiving the tasks inherent in making peace. Beginning in tandem with her late husband, economist and Quaker poet Kenneth Boulding and later on her own, she went on to build a life that encompassed research, writing and teaching, networking and building communities of learning. Dr. Boulding is the author of over 300 publications and was nominated for the Nobel Peace Prize in 1990. Her theoretical work on the role of the family in educating toward social change, and the role women have played in peacemaking, together with her ideas on transnational networks and their relationship to global understanding are considered seminal contributions to twentieth century peace education thought. Prior to her scholarly career, which formally began for her at age fifty after receiving her doctorate from the University of Michigan, Dr. Boulding was making major contributions in other areas, most notably as a peace educator and prominent Quaker and as a leader in the Women’s International League for Peace and Freedom (WILPF), rising up to be International Chair.

She was a founder of the International Peace Research Association and later became its International Secretary-General. She was a co-founder the Consortium on Peace, Research, Education and Development. As an active opponent of the Vietnam War, Dr. Boulding ran for Congress in the 1960s on a Peace Platform in Ann Arbor, Michigan. She taught sociology and women’s studies at the University of Colorado, where she helped to found the peace studies program. She later taught sociology and helped to found the peace studies program at Dartmouth College. She took key leadership positions in the American and International Sociological Associations, worked on climate change, population, and arms control with the American Association of the Advancement of Science, was engaged with the American Futures Society, the World Policy Institute, the United Nations University in Tokyo, consultative work with UNESCO, and was appointed by President Jimmy Carter as the only woman to sit on the Commission to establish the U.S. Institute of Peace. She was on the boards of the National Peace Institute Foundation, the Boulder Parenting Center, the Exploratory Project on Conditions for a Just World Peace, the International Peace Research Association Foundation, the Committee for the Quaker United Nations Office, and Honorary Chair of the National Peace Academy Advisory Board. Prior to her retirement from Dartmouth College, she was a Senior Fellow of the Dickey Center for International Understanding at that university. In 1993 Dr. Boulding represented Quakers at the inaugural gathering of the global Interfaith Peace Council.

Born in 1920 in Oslo, Norway, her status as an immigrant profoundly affected her life and work. A graduate of Douglas College (now part of Rutgers University), Dr. Boulding joined the Religious Society of Friends at age 21, Her sense of herself as a Quaker and her deep spirituality informed all of her subsequent work. Blessed with a very high energy level, at times she also sought out Catholic monasteries for times of retreat from her very heavily scheduled life as an academic, activist, author and speaker. In 1973 she spent a year in retreat in a mountain cabin outside Boulder, CO, where she began writing her seminal work on women, The Underside of History, a View of Women Through Time. Her last book, Cultures of Peace: the Hidden Side of History, is a celebration of the many ways peace is made in everyday places and hidden spaces and its writing was a culmination of her life’s work. Retiring from Dartmouth College in 1985 she returned to Boulder, Colorado. In 1996 she relocated to Wayland, MA and in 2000 she moved to a retirement home in Needham, MA.

Pre-deceased by her husband, Dr. Kenneth Boulding and her two sisters Sylvia Griffith and Vera Larson, she is survived by her five children and their spouses: Russell and Bonnie Boulding of Bloomington, IN, Mark and Pat Boulding of Englewood, CO, Christine Boulding and the late Gregory Graham of Wayland, MA, Philip and Pam Boulding of Olalla, WA and William and Liz Boulding of Durham, NC, 16 grandchildren and 9 great-grandchildren. Memorial contributions may be made to the National Peace Academy, PO Box 382, San Mateo, CA 94401 (please identify Elise Boulding Scholarship Fund, which was established to honor her life of dedication to peace, on check). Russell Boulding (4464 N. Robbs Lane, Bloomington, IN, 47408, jrb-eeh@bluemarble.net) is collecting tributes/reminiscences of those touched by her to be complied, shared with the family and placed in the Elise Boulding Collection at the University of Colorado Archives, Boulder.

Elise Boulding was the “queen of peace networking,” according to LeRoy Moore, one of the founders of the Rocky Mountain Peace and Justice Center in Boulder.

Boulding was an expert at gathering information about global peace activities and presenting it to the public, Moore said. Her ideas did not revolve around the absence of conflict, but rather around turning conflict into something stimulating.

“I think it’s correct to say that she pioneered the whole idea of developing a culture of peace in which children would be raised in a way to deal with conflict in peaceful ways,” Moore said.

Boulding, 89, died on June 24 in Needham, Mass., after dedicating her life to academic study and peace work.

After teaching sociology at Dartmouth University, Boulding taught sociology and women’s studies at the University of Colorado. She also helped found peace studies programs at both universities.

Guy Burgess, instructor in the peace and conflict studies program at CU, said Boulder is among the top two centers for conflict resolution and peace studies in the United States, partly because of Boulding.

“What she did was document the terrible way in which women are treated and exploited all over the world,” Burgess said. “She documented the sort of long-term historical magnitude of the problem. Some of these heart-wrenching stories are now commonplace, but when she was finding this, it was new. And the reason that we know it now is in large part because of her.”

“To put together international collaboration at that time, pre-e-mail, pre-Internet, to be able to find people all over the world is certainly a lot to be remembered for,” he said.

In the 1980s, after Boulding retired from her teaching career at Dartmouth and moved to Boulder, Moore, from the Rocky Mountain Peace and Justice Center, immediately contacted her.

Together, Moore and Boulding started the “Boulder Monday Group,” which met every Monday for about 10 years. Half of the meeting was silent; members would meditate, pray or contemplate. The other half was discussion about local and global peace activities and nonviolence work.

Before Boulding left Boulder in 1996, the Rocky Mountain Peace and Justice Center awarded her the first Peacemaker of the Year award.

During her career, Boulding authored more than 300 publications, including “The Underside of History: A View of Women Through Time,” and “Cultures of Peace: The Hidden Side of History.”

Boulding was preceded in death by her husband, economist and Quaker poet Kenneth Boulding. She is survived by five children, 16 grandchildren and nine great-grandchildren.

The Elise Boulding Scholarship Fund has been created in her honor, and memorial contributions can be made to the National Peace Academy, P.O. Box 382, San Mateo, CA 94401. In addition, Russell Boulding, 4464 North Robbs Lane, Bloomington, IN 47408, is collecting tributes to be compiled and placed in the Elise Boulding Collection at the CU Archives. 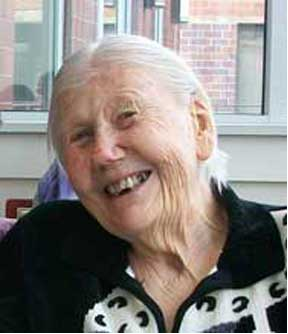 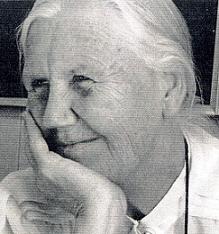