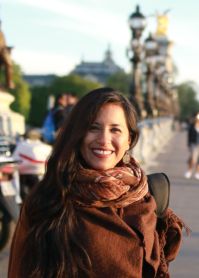 Carla completed her undergraduate work at the University of San Marcos (2004).  She studied for a Master’s Degree in Anthropology with a major in Andean Studies at the Pontifical Catholic University of Perú (2009 – 2013) and a Master’s Degree in History of the Hispanic World at Jaume I University in Castellón, Spain. (“Fundación Carolina Grant 2009 – 2010”)  In addition, she received an MA in the History of Latin America at Pablo de Olvide University in Seville, Spain (2016).

Carla is a Peruvian military historian, and has been a public official in the defense sector and is an expert in cultural management. She specializes in interdisciplinary studies on military culture and memory of ex-combatants of the internal war that took place in Peru between 1980 and 2000. She has participated in the processes of peace, memory, justice and recognition of the victims of this period.

As a member of the Permanent History Commission of the Army, she was a member of the Technical Staff of the Defense Sector in the implementation process of the Place of Memory, Tolerance and Social Inclusion of Peru (2013 – 2015). In addition, she contributed to the research: “The Wars Within: Civil Strife, National Imaginings, and the Rural Bases of the Peruvian State S. XIX – XX” of the Department of History of the University of California Santa Barbara (2004-2012). She attended the “XXII International Peace Operations Course”, organized by the Ministry of Defence of the Kingdom of Spain, for female police and female military personnel in Latin America by the Spanish Agency for International Cooperation and Development (2012).

Her research is aimed at evaluating the impact of militarization processes on the political culture of the Andean and Amazonian populations in the context of the post-war period in Peru. She is currently a member of Grupo Sofía, the Network of Female Social Science Researchers in Peru and the Latin American Studies Association.