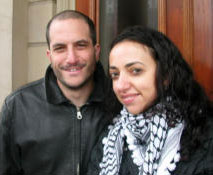 PROBLEM: The goal of Freedom Summer Palestine 2002 was to work for justice and against oppression. The initial plan called for 54 days of non-violent direct actions by Palestinians and International Civilians (Internationals). Organized by the International Solidarity Movement, the 54 days symbolized one day for each year since the Al-Nakbur, the catastrophe. The plan is likened to the civil rights movement in the United States, India’s National Liberation Movement and the Anti-Apartheid Movement in South Africa. Spring was designated as the planning and scheduling time for the summer activities, with local coordination groups established in the West Bank and Gaza. On March 29th all plans were halted after the Israeli Army invaded and seized all of the Palestinian cities along the West Bank, with the exception of Jericho. A new plan was implemented with efforts directed to the humanitarian crisis in Ramallah, Nablus, Jenin, Bethlehem, Hebron, Tulkarm, Qualqiliya and Gaza.

RESEARCHMETHODS: International civilians documented, reported and videotaped their actions and the various criminal activities of the Israeli occupation forces. The documentation occurred at three levels: non-confrontational, confrontational, and direct action in removing occupation through non-violent means.

RESULTS: Freedom Summer Palestine 2002, the 54 day observance was temporarily shelved, because of the turmoil in the West Bank. Plans were made to resurrect the project for the summer of 2003. The plans are tenuous at best with a war against Iraq looming on the horizon. The humanitarian activities were successful. More than 500 activists, ranging in age from 18 to 80, from around the world, came to participate in protesting, shielding, documenting and challenging the Israelis. The International Solidarity Movement delivered food and medicine to families under curfew, rode in ambulances providing protection for the medics, escorted students to and from school, and maintained a presence in homes, hospitals, clinics and refugee camps to prevent their destruction. Although the group was successful in organizing some non-violent assaults, others did result in arrest and deportation. Documentation is in the form of first hand accounts and photos available at the website www.palsolidarity.org.

The Foundation acknowledges that Huwaida Arraf and Adam Shapiro have successfully completed their project.